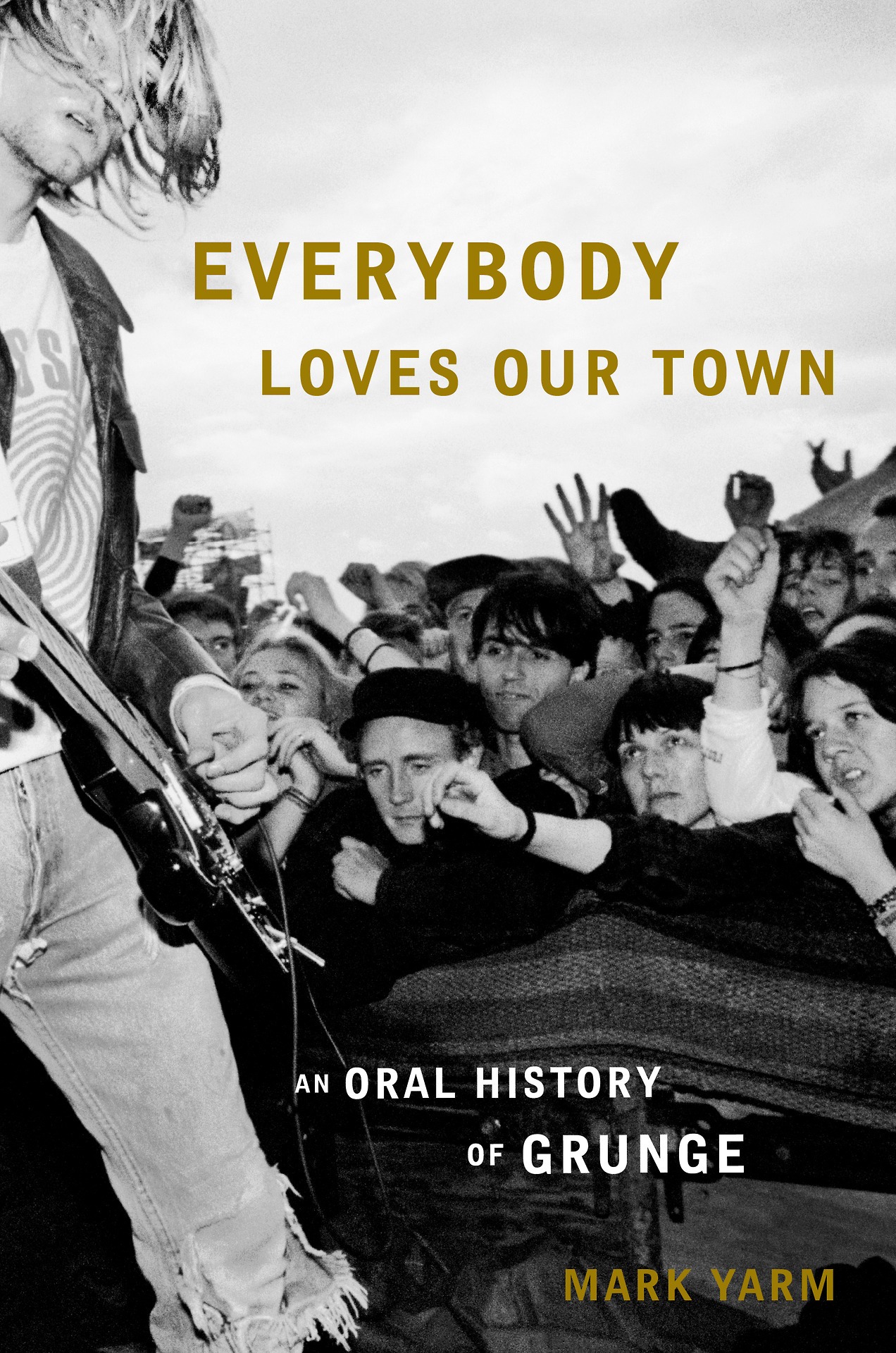 I am the author of Everybody Loves Our Town: An Oral History of Grunge, published in hardcover September 2011 (Crown Archetype) and paperback March 2012 (Three Rivers Press). Outside of North America, it's been released in Bulgaria, China (Mandarin), Finland, Poland, Spain, and the U.K. Order info here.

“This volume could have been a huge, snarky compendium of gossip and score settling from the inhabitants of a claustrophobically insular local music scene. And it is, but in the best possible way—and it’s also much, much more… . Yarm has culled the story of grunge from the people who created it, and their testimony is remarkable for its eloquence and its passion and its fairness and its anger.” —Lev Grossman, Time

“This exhaustive oral history features unknowns, cult ﬁgures, supporting players and stars; each gets the time he or she deserves as Yarm pieces together the arc of a scene that built itself from scratch, blossomed beyond most people’s dreams, and then crashed. Yes, there are plenty of Kurt Cobain stories. But there’s much more, too—indelible characters, weird scenes, creative chaos, laughs and tragedy and lots of cheap beer.” —Ann Powers, NPR

“A comprehensive and often fascinating assessment of the Seattle scene, a music revolution that ate its own children… . Just as surely as Detroit, Liverpool, New Orleans, and Chicago are forever linked to a particular music, Seattle was the creative hub of a style that for a couple of years dominated pop’s consciousness. Mr. Yarm’s pointed, poignant history reminds rock fans how those power chords resonate.” —The Wall Street Journal

“There’s certainly no shortage of entertainingly thorough books documenting the early ’90s alt-rock boom and What Kurt Hath Wrought. But for exhaustive detail about Seattle’s unlikely, meteoric stint as the center of the universe—from Cat Butt to Candlebox and all points in between—this is hard to beat.” —Spin

“If you loved the ’90s and you haven’t read this book, you MUST. I’m absolutely obsessed with Mark Yarm’s masterpiece right now…” —USAToday.com’s Pop Candy column

“A classic of monumental scale.” —Paste

“Riveting, gossipy, and impossible to put down.” —Vulture

“For hardcore fans or people just curious about what the fuss was all about, Mark Yarm’s excellent new book Everybody Loves Our Town: An Oral History of Grunge is well worth the read. Yarm has done an admirable job of assembling an engaging, funny and ultimately sad narrative by letting the people who helped create the Jet City sound talk about what happened in their own words.” —Seattle Post-Intelligencer

“A deeply funny story, as well as a deeply sad story—the glorious ’90s moment when a bunch of punk rock bands from Seattle accidentally blew up into the world’s biggest noise. Mark Yarm gives the deﬁnitive chronicle of how it all happened, and how it ended too soon.” —Rob Shefﬁeld, author of Love Is a Mix Tape and Talking to Girls About Duran Duran

“I came away from this book with a big smile on my face. Lots of it is like a gray day in western Washington; you’ve been kicked out of yet another band, and your girlfriend is spending far too much time with the drummer from the Melvins or the Screaming Trees. In the end, though, Everybody Loves Our Town made me want to be young, stupid and lucky again.” —The Washington Post

“Mark Yarm has assembled the gospels of grunge music. Here is a warts-and-elbows refresher course for those of us who still ﬁnd our memories of the era a little hazy.” —Chuck Palahniuk, author of Fight Club

“There’s a wealth of insider gossip to savor… . [Filled] with quotes that burst with passion and candor.” —New York Daily News

“Yarm’s account captures the essential tension that made the era so compelling.” —Greg Kot, Chicago Tribune

“A comprehensive, entertaining and exceptionally readable account of the musicians and supporting cast who permanently altered the course of rock.” —The Times-Picayune

“Exhilarating … Mark Yarm’s brilliant and exhaustive oral history of grunge is full of … vivid observations. Some 250 interviews with those intimately associated with the most unlikely musical sensation of all time piece together a story that is hilarious and tragic and utterly gripping.” —Sunday Times of London

“A Herculean work of interviewing and editing which gives everyone a voice, from the biggest stars to the lowliest foot soldiers… . Though the Seattle scene’s stew of folly, feuding, rampant drug addiction and a startling number of fatalities might have made for a voyeuristic tale, Yarm leaves the reader full of empathy for young men and women swept up in a cultural moment they couldn’t control.” —The Guardian (U.K.)

“[A] lively, funny, melancholy and exhaustive oral history … For all its eventual compromise and dissolution, Seattle was brieﬂy an exhilarating pop cultural moment to rank with the greats. Yarm’s labour of love has well and truly done it justice.” —Time Out London

“From basement shenanigans to grunge’s MTV peak and its subsequent descent into drug-fuelled darkness, Yarm’s book is at once hilarious, enlightening and heartbreaking—a masterful, comprehensive reminder of how an entire musical community became the victim of its own unexpected success. An absolute must-read for music fans.” —The Vancouver Sun

“A very noble record of the grunge scene—and an excellent addition to the growing library of oral history music books.” —Legs McNeil, coauthor of Please Kill Me: The Uncensored Oral History of Punk

“Full of so many entertaining stories and thrilling anecdotes that we have read it cover-to-cover TWICE. You should do the same!” —VH1.com

“Super-informative and also grody as all hell.” —The Ringer

“A fantastic work of journalism.” —The Onion A.V. Club

“The definitive oral history of the '90s music scene.” —The Hairpin

“Forget the biographies which seek to enshrine Kurt Cobain as a tragic punk rock martyr, this is the only genuinely indispensable book on grunge.” —Classic Rock

“The scope is encyclopaedic and the closeness to the subject unparalleled.” —Record Collector

“Like a very extended and entertaining all-night bullshit session among everyone who mattered during the late-’80s/early-’90s music scene.” —Seattle Weekly

“This massively readable tome gathers recollections from every grunge band you’ve ever heard of (Pearl Jam, Nirvana, Soundgarden, Melvins) and some you haven’t (we hardly knew ye, Skin Yard)… . The genre’s ﬁrst truly comprehensive insider history … It’s gossipy … and fascinating, with so much backstabbing and death it’s like Shakespeare, if Shakespeare had written about heroin addicts with bad hair.” —Revolver

“Yarm’s affectionate, gossipy, detailed look at the highs and lows of the contemporary Seattle music scene is one of the most essential rock books of recent years.” —Kirkus Reviews, ★starred review

“Great oral histories are rare. Hewing a narrative from all those chaotic and often conﬂicting memories with testimony alone and no guide-prose or stage direction is difﬁcult. Making that somehow intimate and epic is nearly impossible. When a writer pulls it off, as Mark Yarm has with Everybody Loves Our Town, it’s really a gift: the subject or scene ﬁnally gets its deﬁnitive record, and the reader gains what feels like a room full of brand new friends. One of the best rock reads in a very long time.” —Marc Spitz, coauthor of We Got the Neutron Bomb: The Untold Story of L.A. Punk

“A fun, easy, informative read about an important if hard to define pop music genre.” —Booklist

“If every book on rock was this good, we’d all be reading more.” —Omaha World Herald